Pierre-Emerick Aubameyang returns to his best with maiden Premier League treble; Hector Bellerin scores the other in entertaining Emirates clash; Pascal Struijk and Helder Costa scored for Leeds as Arsenal leapfrog them into 10th 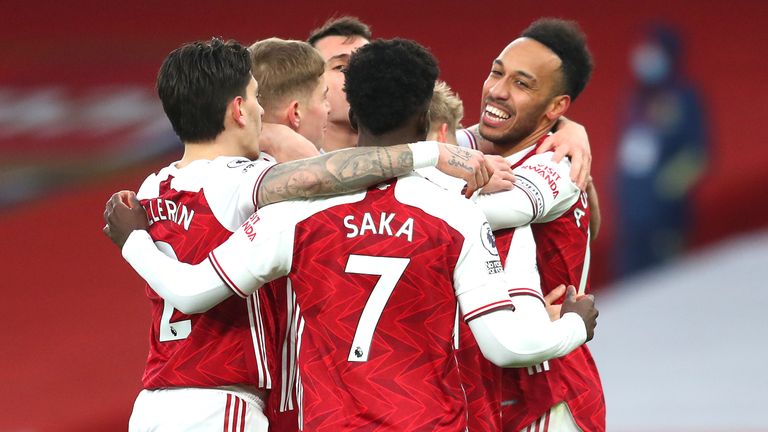 Pierre-Emerick Aubameyang’s first Premier League hat-trick guided Arsenal to a 4-2 victory over a leaky Leeds at the Emirates despite the visitors’ late rally.

Arsenal were 3-0 up at half-time for the first time in the Premier League since February 2018 as Leeds crumbled, and it was Aubameyang, who has now scored more goals in his last four Premier League appearances (5) than he had in his previous 16, benefiting most.

First, Aubameyang’s clever, flash finish into the near post from 15 yards (13) put Arsenal ahead, before the Gabon striker doubled his and the Gunners’ tally with a penalty after goalkeeper Illan Meslier mistake, dwelling too long on the ball before fouling Bukayo Saka (41).
Hector Bellerin’s first goal of the season made it 3-0 on the stroke of half-time, again finishing at the near post following superb Arsenal interplay in the box (45), and Aubameyang got his hat-trick after the break with a far-post header from Emile Smith Rowe’s cross-shot (47).

⚽⚽⚽ Pierre-Emerick Aubameyang has scored his first PL hat-trick. He’s the first Gunners player to score a hat-trick in the competition since Aaron Ramsey v Everton in February 2018 (112 PL games ago) pic.twitter.com/KOd6BXzJlz

As ever with Leeds, there was entertainment at both ends as Marcelo Bielsa’s side caused a scare, halving the deficit through Pascal Struijk’s bullet header (58) and sub Helder Costa’s close-range finish (69), but Arsenal saw the game out.

The result means Arsenal leapfrog Leeds into 10th, though Leeds are two points behind with a game in hand.

Man of the match: Pierre-Emerick Aubameyang

How Aubameyang returned to his best in win

Few at the start of the season would have predicted this would be a mid-table clash in mid-February, or that Leeds would be a point ahead of Arsenal with a game in hand, but the Gunners took a step to readdressing that thanks to a fine first-half show.

Leeds’ style means it’s either “feast or famine” for Marcelo Bielsa’s side this season, said Alan Smith on Sky Sports commentary, and this was certainly the latter as Arsenal led 3-0 at the break.

Playing through the middle, Aubameyang put the hosts ahead with a trademark striker’s finish, bursting into the box with a few stepovers, using defenders Liam Cooper and Luke Ayling as a wall as he struck through them both and low into the near post from 15 yards.

Aubameyang should have doubled Arsenal’s lead as David Luiz’s cut-back from the byline found him in space, but his goalbound effort was brilliantly blocked by Ayling.

Arsenal thought they had a penalty as Saka went down in the box having brushed past Cooper, but VAR intervened, and after Stuart Attwell went to the pitchside monitor, the decision was overturned.

But just moments later Meslier gave away a stonewall penalty, dwelling on the ball from a pass-back, allowing the livewire Saka to nip in, before fouling him just inside the box. Aubameyang dispatched, sending Meslier the wrong way for his 200th goal in Europe’s top five leagues.

Arsenal toyed with Leeds and got another just before the break, as intricate build-up play from Saka, Smith Rowe and finally Dani Ceballos in the box allowed Bellerin space to shoot from 10 yards, and his near post shot went through Meslier, who should have done better. It was “five-a-side” football from Arsenal, said Smith on commentary.

Aubemeyang completed his hat-trick just two minutes after the break as Smith Rowe, entering the box from the left, looked to aim an effort for the far corner, but instead the ball fell perfectly for his team-mates head at the far post to head home.

Leeds were given a lifeline with half an hour remaining as Struijk rose above Luiz from a Raphinha corner, powering his header home, before sub Costa latched onto sub Tyler Roberts’ centre at the near post, poking past Leno to bring Leeds within two.

Patrick Bamford wanted a penalty after being squeezed out in the box by Cedric and Gabriel, while at the other end Aubameyang struck the bar with a snapshot from 12 yards.

Arsenal made five changes from the side that lost 1-0 at Aston Villa. Leno came back in from suspension to replace Ryan in goal, while David Luiz was also back to replace Rob Holding in defence. Elsewhere, Odegaard, Ceballos and Aubameyang started, replacing Lacazette, Pepe and the injured Partey.

Leeds made just one change from the 2-0 win over Crystal Palace as Phillips missed out, replaced by Shackleton for just his second Premier League start of the season.

Arsenal managed the closing stages well and saw out the victory, their first in three Premier League games, leaving them just six points behind champions Liverpool in fourth, and five points off the top six.

Mikel Arteta will now be looking on a surge for the European spots, while Bielsa’s Leeds continue to entertain, with 82 goals scored in their 23 Premier League fixtures this season.

What the managers said…

Arsenal boss Mikel Arteta: “[Aubameyang] has been training really good, he wants to get back, he wants to help the team and I could see this week, I had a feeling to put him as the No 9 today and he has done the job.

“The amount of chances we created and the type of goals we scored today really pleased me. The attacking patterns we had today, the confidence that the team had against a team that is constantly pressing you to be comfortable to get out of this situation. Overall, a lot of positives.”

Leeds boss Marcelo Bielsa: “When we were building from the back, we didn’t manage to take the ball from our half to their half, there were no surprises for either of the two managers, they knew how we were going to press and they resolved this.