Not long after The Duke and Duchess of Sussex introduced their newborn child to the world, English comedian Danny Baker, 61, took to Twitter to share a photo of a monkey dressed in a suit outside a hospital with a man and woman by his sides.

He has immediately sacked from his job after he shared a racist tweet likening Meghan and Harry’s baby to a monkey.”Royal baby leaves hospital,” he captioned the photo. 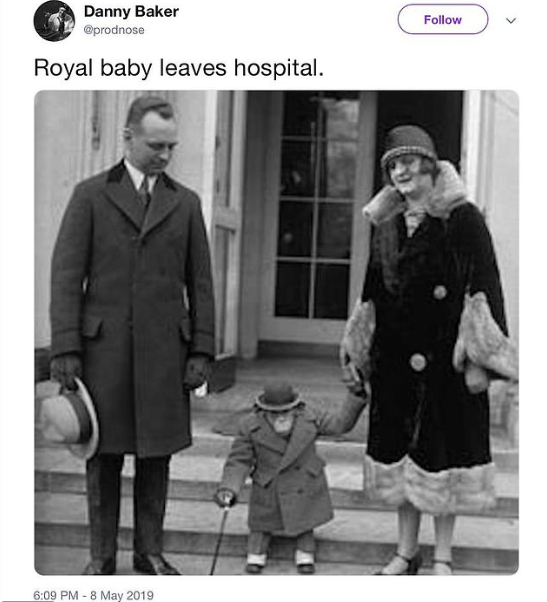 This caused outrage and he was called out for likening the royal baby to a monkey because his mother is half black. He immediately deleted the tweet and issued an apology, claiming his intention wasn’t to be racist.

Here we go.
Opened door, grinning Mail hack.
"Do you think black people look like monkeys?"
Any other time you'd knock someone right on their arse for saying that.
No mate. Gag pic. Posh baby chimp. Alerted to circs. Appalled. Deleted. Apologised.
He asks again! #MailonRacism

He revealed this in a tweet this morning writing: “Just got fired from @bbcradio5live.” The BBC released a statement with regards to his sacking, saying: “This was a serious error of judgment and goes against the values we as a station aim to embody.

Just got fired from @bbc5live.
For the record – it was red sauce. Always.

5 Live controller Jonathan Wall wrote: “I have just spoken to Danny Baker and let him know that he will no longer be presenting his weekly show with us. “Danny made a serious error of judgement on social media last night and it goes against the values we live and breathe on this radio station.”Danny has been a brilliant broadcaster for us and I want to thank him for his work with us on Saturday mornings over the last few years.”

ALSO READ  Peruzzi Is The Mole In DMW – Kemi Olunloyo

Danny Baker is now blasting BBC bosses for giving in to the people’s outrage and calls to fire him. The 61-year-old said he had been “literally thrown under the bus” as he was fired over the phone this morning in what he described as a “masterclass of pompous faux-gravity.”

The call to fire me from @bbc5live was a masterclass of pompous faux-gravity. Took a tone that said I actually meant that ridiculous tweet and the BBC must uphold blah blah blah. Literally threw me under the bus. Could hear the suits knees knocking. #Fuckem

Speaking to Daily Mail from his house this morning, he insisted he’s not racist. He told MailOnline: “I put up a silly photo for a joke. It was monkey in a top hat or something. I would have put it up for anyone. I apologised and I took it down when it was pointed out. Once I realised [that it was offensive] I took it down.”

These are tweets from web users calling for Danny to be fired. 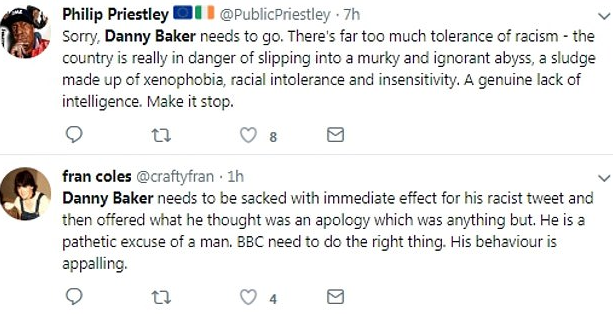