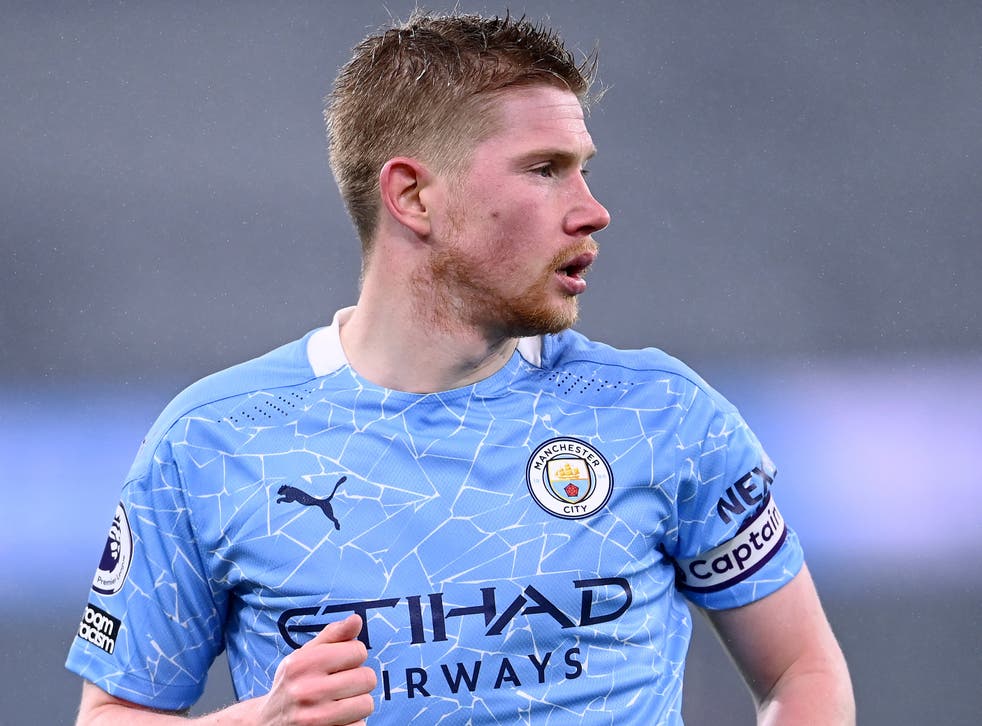 Kevin De Bruyne has warned Manchester City not to be distracted by dreams of an unprecedented quadruple as the history-chasers face Everton in the FA Cup quarter-finals this weekend.

City look certain to win the Premier League after moving 14 points clear at the top and have a League Cup final date with Tottenham in April.

They moved into the Champions League quarter-finals with an emphatic 4-0 aggregate success against Borussia Moenchengladbach in midweek.

On Saturday, Guardiola’s side head to Goodison Park with an opportunity to reach the FA Cup semi-finals for the fourth time in the Catalan’s five-year reign.

But as the quadruple talk intensifies, Guardiola is keen to stop his players losing focus.

City defender Oleksandr Zinchenko irritated Guardiola this week with his brash claim that they have the “best players in the world” and are facing the “most important two months of our careers”.

Guardiola was quick to rebuke his defender for getting ahead of himself and, aware how tough it is to challenge in so many competitions, City midfielder De Bruyne agrees.

City won the domestic treble in 2019, but missed out on Champions League glory after losing to Tottenham in the quarter-finals.

“I remember people two years ago were saying that we could win it, but it’s very hard,” De Bruyne said after his superb goal in City’s victory against Moenchengladbach on Tuesday.

“The amount of games and the physical and mental ability you need to have as a player or as a squad is very high. We try to do our best and focus game by game. That is the only thing we can do.”

ALSO READ  Bale May be on his Last World Cup Campaign

Everton have not won a major trophy since the 1995 FA Cup and they go into the City clash after two successive league defeats.

Chelsea will be expected to extend their unbeaten run under Thomas Tuchel to 14 matches when they host struggling Sheffield United in the last eight.

Tuchel’s side advanced to the Champions League quarter-finals for the first time since 2014 with an impressive 3-0 aggregate win against La Liga leaders Atletico Madrid this week.

The revitalised Blues have conceded only two goals in Tuchel’s 13 games.

Ziyech scored his first goal since October against Atletico but, in a sign of the high standards he demands, Tuchel said the former Ajax forward still has room for improvement.

“He suffers a little bit with our style. He needs to adapt to the structure and be more reliable with the ball,” said the Chelsea boss.

The bottom-of-the-table Blades are in turmoil following last weekend’s 5-0 thrashing at Leicester — a woeful display that came just 24 hours after the exit of popular boss Chris Wilder by mutual consent.

Ahead of Sunday’s trip to Leicester, Manchester United boss Ole Gunnar Solskjaer said United’s progress under his leadership should not be judged solely on trophies.

Second-placed United have improved in the Premier League this season.

But, with the club waiting for their first silverware since 2017, Solskjaer could do with FA Cup success to keep the critics off his back.

“Sometimes a trophy can hide the other fact what’s happening at the club,” Solskjaer said.

Since reaching the quarter-finals, Southampton have been dragged towards the relegation zone after five defeats in their past seven games.

Their south-coast derby at Championship side Bournemouth — the only non-Premier League team left in the tournament — offers a chance to get back on track before returning to the tense fight for survival.