“This shameless nigga out on stages performing my songs like he created it. I still remember how he tried to steal the record after I put him on it, forcing me to put it out prematurely. Nigga ran off with the unmastered draft and went to print CDs with himself as the lead artist, even his verse was written by me #Appropriation #getyourownshit Lesson to young artist Don’t ever do pity features,” he wrote. 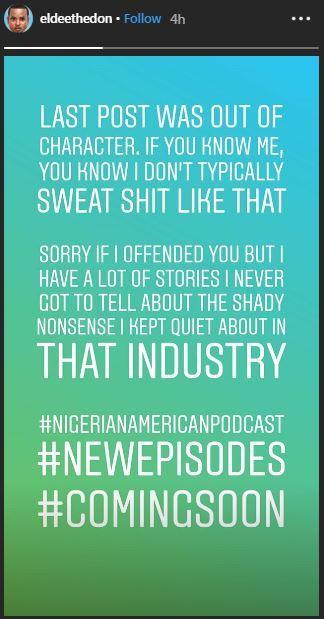 It didn’t end there, he went on to call Olu Maintain’s action, shameless; “This right here is shameless appropriation 👎👎👎.” However, the comments have been taken down while eLDee took to his Instagram stories to apologies to his fans for his outburst

Obviously, eLDee’s reaction to Olu Maintain’s blunder indicates that all has never been well with their relationship. We hope to hear Olu Maintain’s side of the story very soon as this story develops.