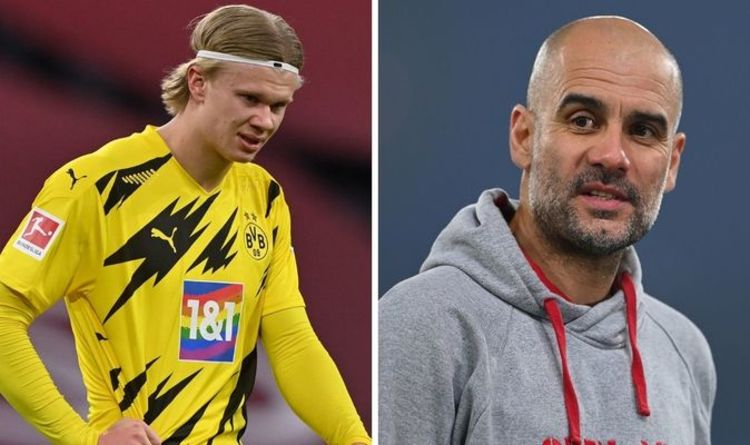 Already well aware of Haaland’s quality, City boss Guardiola has a chance to take a closer look when Dortmund visit the Etihad Stadium for the Champions League quarter-final first leg on Tuesday.

“He’s exceptional for his age. The numbers speak for themselves,” Guardiola told reporters on Monday.

“He can score right, left, counter attacks, in the box, headers. He’s a fantastic striker, everyone knows it.

“He’s only 20. To score that many goals at this age, it’s not easy to find a player like that.

“A blind guy can realise he’s a good striker, it’s not necessary to be a manager.”

The runaway Premier League leaders will need a new forward next season after announcing their record goalscorer Sergio Aguero is set to leave at the end of this term.

Guardiola recently suggested the financial fallout from the coronavirus pandemic would make it difficult for his team to meet Dortmund’s reported £130 million ($180 million) asking price for Haaland.

But Guardiola dropped a hint that a bid for Haaland would not be impossible as he suggested City would eventually break their transfer record — currently the £62 million they spent on Benfica defender Ruben Dias last year.

“So far, the club has decided not to spend close to £100 million for a player,” Guardiola said.

“Maybe in the future it will happen when the club decides it is necessary to improve the team for the next five to 10 years. The organisation has so far decided not to and that is why we haven’t. Maybe in the future.

“Spending a lot of money on one player doesn’t give you an advantage to win. Football is a team game, everyone makes a contribution. Competitions are not won by one player, it is every player.”

Although Dortmund are struggling in the Bundesliga, Haaland’s presence means they could pose a significant threat to City’s quadruple bid.

With a third Premier League title in four years a formality for City — who are in the League Cup final and FA Cup semi-finals — it is the Champions League that will be their focus in the final weeks of the campaign.

Criticised for failing to win the Champions League without Barca star Lionel Messi, Guardiola has seen City eliminated at the quarter-final stage of the tournament for the last three years.

“Of course, it remained in my head for weeks and it was painful, I cannot deny,” Guardiola said.

“It was the last game of the season, we wanted to go through and we accept we didn’t do it well, didn’t deserve to go through.

“Going out to Lyon, it was different. We went out, said goodbye and went on our holidays. It was a disappointment but we are here again, with a chance.”

The ghosts of those bitter European defeats were on Guardiola’s mind as he claimed their fine Premier League form would not be a factor against Dortmund.

“Why should we win the other competitions just because we are leading the Premier League?” he said.

“The only concern is to try to win the game. Win this game and after comes Leeds, and after we go to Dortmund to win that game.”