Italy got their World Cup qualifying campaign off the mark with a comfortable 2-0 victory over Northern Ireland in their Group C qualifier in Parma on Thursday. 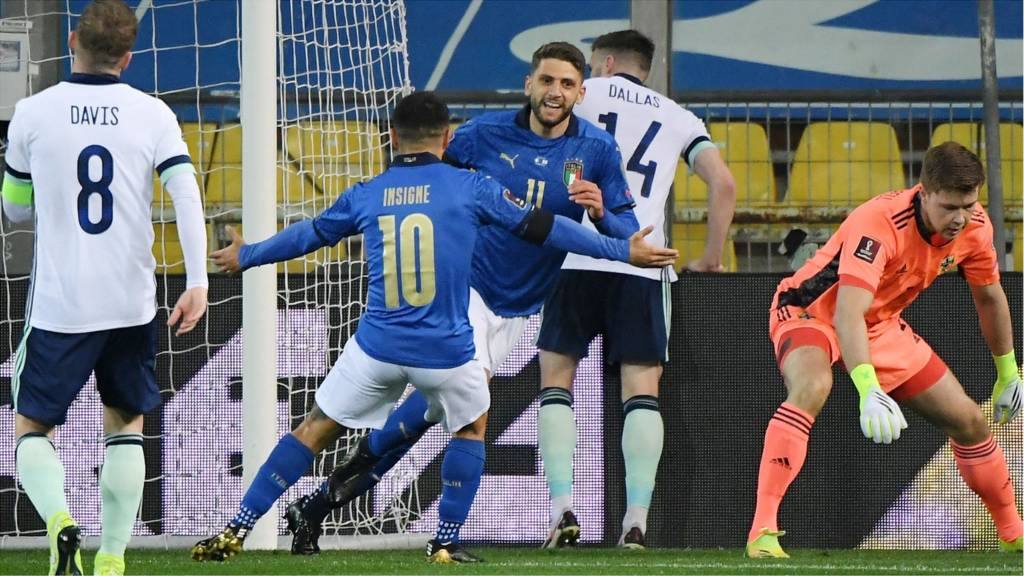 Domenico Berardi and Ciro Immobile of Italy scored in the first half in the Stadio Ennio Tardi as the hosts extended their unbeaten run under coach Roberto Mancini to 23 games.

Mancini took over after the four-time World Cup winners failed to qualify for the 2018 tournament, missing the finals for the first time in 60 years.

Since then Mancini has the best record of any Azzurri coach in the last 50 years with a run of 16 wins and seven draws, including 10 wins in their Euro 2020 qualifiers.

The home side dominated early with Immobile having a shot on goal after 12 minutes, the Lazio striker chesting down an Alessandro Florenzi cross, straight into the hands of visiting keeper Bailey Peacock-Farrell.

But two minutes later Berardi made no mistake, again off a Florenzi cross, sending in from a tight angle.

Emerson headed wide and Immobile threatened before sending in on his third attempt six minutes before the break off a Lorenzo Insigne cross.

Ian Baraclough’s Northern Ireland are bidding to qualify for the World Cup for the first time since 1986.

And the visitors attacked more in the second half with a poor Manuel Locatelli back pass after 56 minutes offering the visitors a double chance.

Hull City’s Gavin Whyte latched onto the under-hit pass but Gianluigi Donnarumma blocked only for Michael Smith to get to the ball which the keeper again saved.

Linfield striker Shayne Lavery also tested Donnarumma with 20 minutes to go with the AC Milan keeper getting down low to stop a volley from skipper Davis.

But the home side were never under threat with Immobile and substitutes Federico Chiesa and Leonardo Spinazzola threatening a third late.

Italy next play in Bulgaria on Sunday.