His decision to opt to play for Germany over England is said to have disappointed Gareth Southgate, yet teenager Jamal Musiala still relies on his mum to drive him to Bayern Munich training sessions 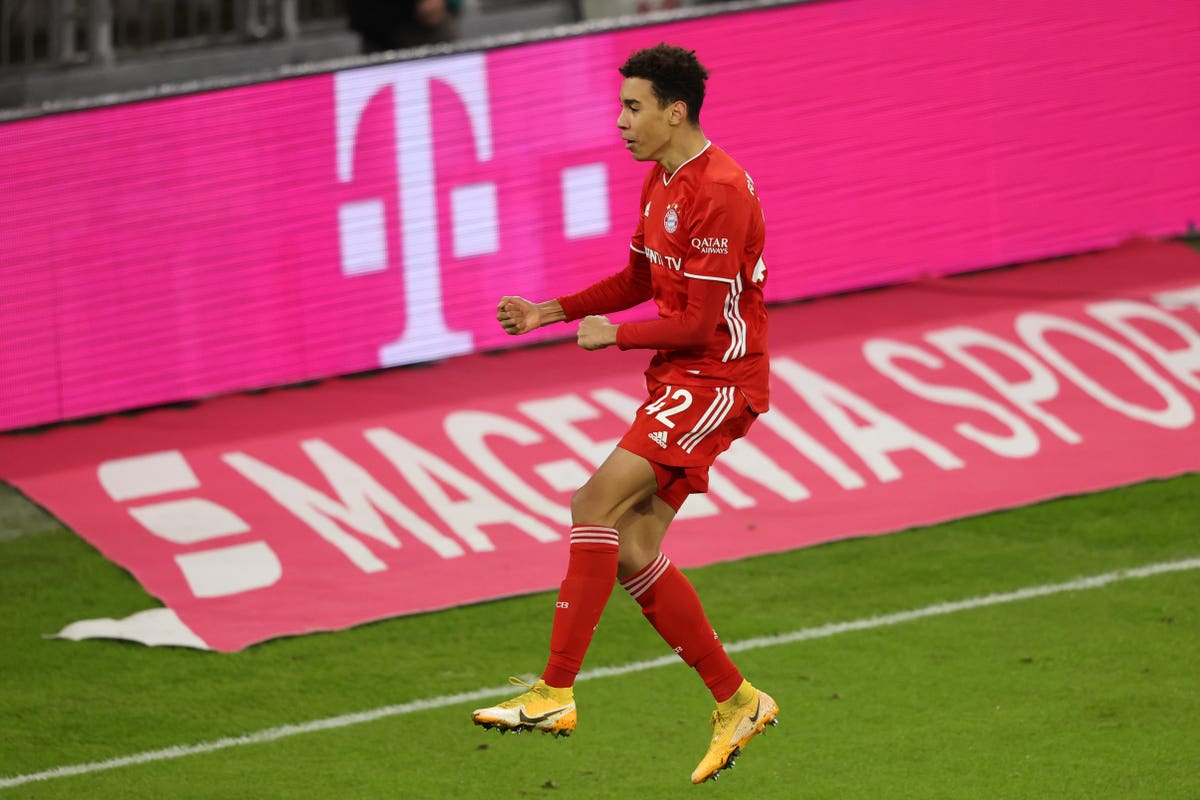 Jamal Musiala this month signed a five-year contract with Bayern, a week after his 18th birthday, which reportedly earns him around five million euros ($6 million) per year.

The baby-faced attacking midfielder could make his fifth Champions League appearance at home to Lazio on Wednesday, having scored his first European goal in the 4-1 first-leg rout in Rome.

Jamal Musiala was born in Stuttgart, but moved to London as a child and came through Chelsea’s academy before joining Bayern in 2019.

“He was always much better than the other kids and mostly played with children two years older,” Branko Milenkovski, his first coach at TSV Lehnerz in Hessen, told HR-sport.

Musiala went on to play for both Germany and England at Under-16 level.

On Friday, FIFA approved his decision to play senior football for Germany after Musiala had played twice for England’s Under-21s last November.

Before announcing his decision, which was revealed the day after becoming Bayern’s youngest Champions League scorer, Musiala broke the news to Southgate.

“I wanted to explain the reasons for my decision to John McDermott (FA Technical Director) and Gareth Southgate,” Musiala told magazine Sport Bild.

“They were a bit disappointed, but understood my decision and wished me all the best.”

The decision to reject England for Germany came down to gut feeling.

“I just have two hearts in me and I’m really proud to play for Germany now. So for the country in which I was born,” he added.

As German magazine Kicker put it, Musiala’s rise at Bayern has been nothing short of “meteoric”.

He became the youngest player in Bayern’s history when he made his Bundesliga debut last June, aged 17 years and 115 days.

He then became the club’s youngest goalscorer in Germany’s top-flight when he scored a goal after coming off the bench in the 8-0 thrashing of Schalke in September.

Loew reportedly plans to give the teenager his first call-up to the senior squad for Germany’s World Cup qualifiers against Iceland, Romania and North Macedonia at the end of March.

Jamal Musiala, however, still feels compelled to refer to the national coach as “Mr Loew”.

“Now I’m looking forward to getting to know the team better in March. Mr. Loew showed me a very clear path in the national team during our conversations,” added Musiala.

He might already be on the radar of Germany’s World Cup-winning coach, who steps down after the Euros, but Musiala is still chauffeured to and from Bayern training by his mother.

“I’m currently working towards getting my driving licence and I’m really looking forward to driving myself soon.”

His goal is to win a place in the national squad for the European Championship, where Germany face France, Portugal and Hungary in their group.

“I will definitely give everything in (Bayern’s) remaining games to get selected for the European Championship.”

Despite his dramatic rise, Musiala is still learning his trade and has started just seven games this season in all competitions.

He had to be content with an 11-minute cameo on the wing as a replacement for Kingsley Coman in Bayern’s 3-1 win at Bremen on Saturday.

However, Bayern coach Hansi Flick clearly sees a bright future for the teenager.

“He’s good on the ball, has a good feeling for where he needs to be on the pitch and we are very pleased with him,” said Flick after Musiala’s goal in Rome.