UEFA is investigating after Rangers midfielder Glen Kamara alleged he was racially abused during his side’s Europa League defeat by Slavia Prague. 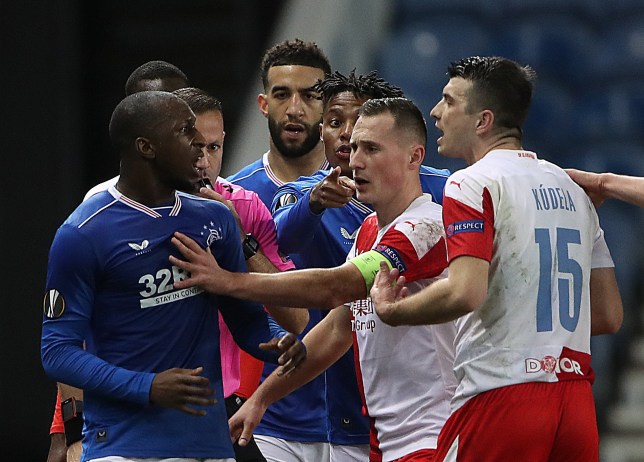 Steven Gerrard’s nine-man Scottish champions crashed out at the last-16 stage after a 2-0 loss Slavia Prague at Ibrox on Thursday but the match was overshadowed by the incident that erupted just minutes before the end.

Kamara and his team-mates reacted with fury as they claimed Czech defender Ondrej Kudela had whispered a discriminatory slur into the midfielder’s ear while cupping his hand.

Slavia rejected the racism allegations and accused Kamara of assaulting Kudela in the tunnel after the final whistle.

European football’s governing body has announced it is looking into the incident.

“UEFA is aware of an incident which occurred in the tunnel after the end of the match and which involved some players of both teams,” a statement read.

“We are waiting to receive detailed reports of the match officials who were present at the game before commenting further.”

Gerrard has vowed to stand with Kamara and warned UEFA it must not sweep the alleged incident “under the carpet”.

“I, 100 percent, believe what he is saying in terms of the accusation,” said the Rangers boss.

“Other players around him heard it so I will stand toe to toe with Glen Kamara and I’ll deal with this however Glen wants to deal with it.”

But Slavia countered Rangers’ claims, insisting Kudela was the victim of an attack from Kamara after the final whistle.

They also took aim at the rest of Gerrard’s team, accusing the Ibrox club of “unprecedentedly malicious play”.

Rangers forward Kemar Roofe was shown a straight red card for a brutal high challenge on Ondrej Kolar, which left the Slavia goalkeeper with a fractured skull and horrific gash on his forehead.

Defender Leon Balogun was also dismissed after collecting two bookings, reducing Rangers to nine men as they exited the Europa League 3-1 on aggregate.

In a statement, Prague bosses said: “Slavia resolutely denies the disgusting accusation of one of the team captains, Ondrej Kudela, of racist behaviour.

According to the statement, Kudela acknowledged he had used an expletive after a “brutal foul” but denied using a racial slur.

“Slavia players faced an unprecedentedly malicious play from their opponents,” the statement said. “They have never experienced such play in any game they participated in the modern history of the European competitions.

“Many brutal tackles resulted in injuries of our players. Goalkeeper Ondrej Kolar travelled to a hospital with 10 stitches on his head.

“After the end of the game, the team was not allowed to enter the dressing room. Ondrej Kudela was assaulted by Kamara and hit with fists in the head when Rangers manager Steven Gerrard witnessed the incident.”

Rangers managing director Stewart Robertson issued a statement of support for Kamara on Friday, saying racial abuse would not be tolerated.

“We refuse to acknowledge any attempt to defend, deflect or deny the abuse Glen Kamara experienced last night,” he said.

“UEFA will be well aware the football world is watching,” he added. “We expect a robust and unequivocal response in relation to this incident.”