Tiwa Savage ‘One’ video is back after unproven copyright claim

Tiwa Savage the queen of Afro beats music released a new single titled ‘One’ as of  December 2018. The highly anticipated track ‘One’ is a melodic tune that should hit home for Afro-soul music lovers. Capping off a very strong and successful year with two MTV Europe Music Awards (EMA) nomination, including Best African Artist!

Danny Young had alleged on his Instagram page hours after the release of the song that Tiwa Savage had taken a line off his 2009 single, ‘Oju Ti Won.’ He then made an official complaint to the YouTube who immediately took down the video. However, on Saturday, March 2, 2019, the video was restored as investigations into the claim could not be ascertained.

Following a successful 2018, Tiwa Savage had closed out the year with the release of the KillerTunez produced record in December, thanking God for all the success that has come her way

Earlier this morning, we had reported that the video for Tiwa Savage’s song, ‘One’ which was initially taken down by streaming platform, YouTube following allegations of copyright infringement by a third party believed to be Ajibola Olumuyiwa Danladi, popularly known as Danny Young had been restored as the allegations could not be proven.

But instead of a happy ending, Danny Young has now taken the case further with a lawsuit filed against her at the Federal High Court, Lagos, dated February 13, 2019. 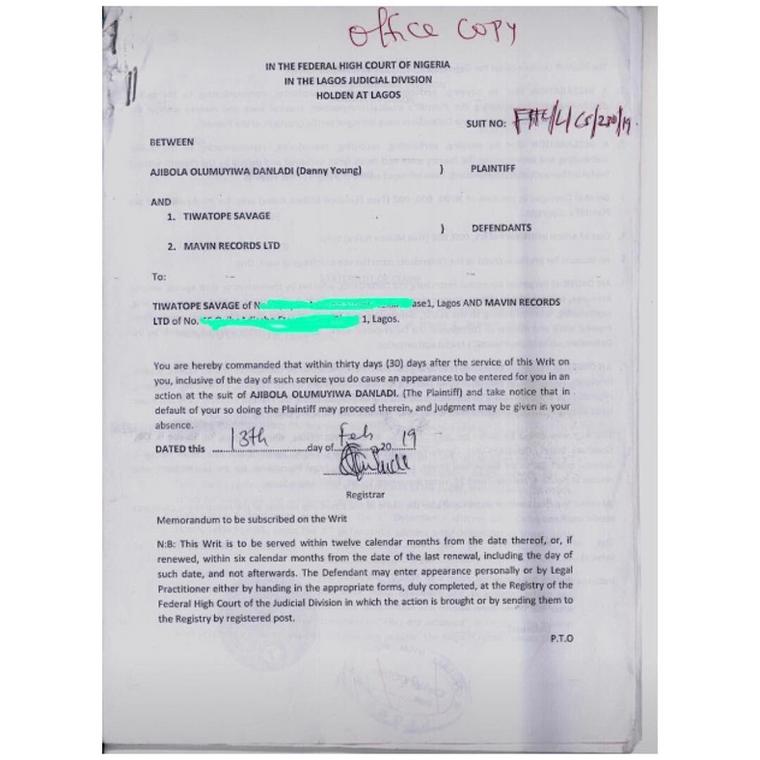 This was made known by Danny Young on his Instagram page with the caption,

”Tiwa! I know pple love u! Even me… BUT I still have to sue u bcos u stole my sh*t! a simple dialogue would av solved this but u prefer it this way. Now we will be in court discussing some 200,000,000 Damages.” 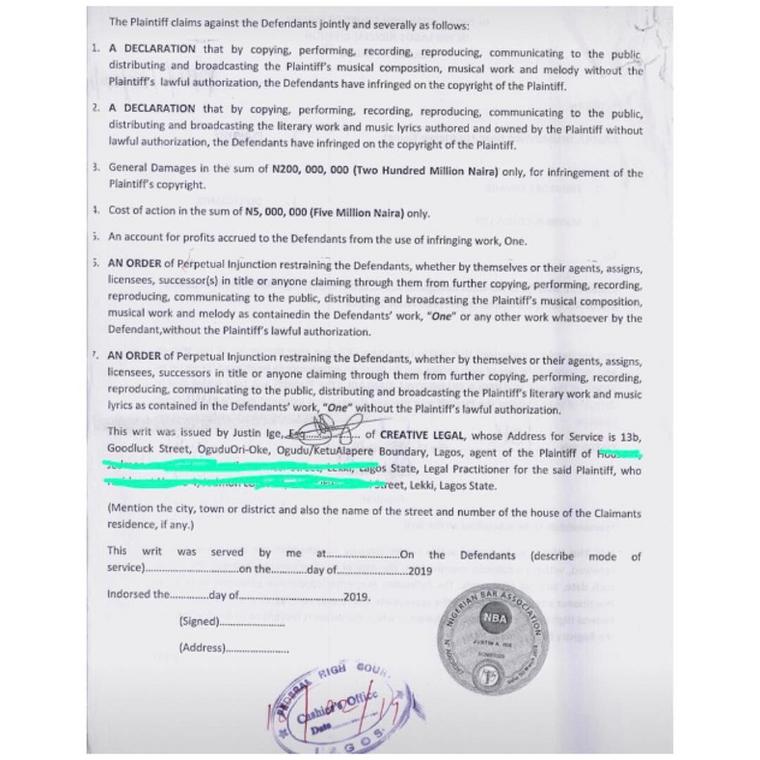 In a press release by the law firm representing him, Creative Legal and signed by its Principal Attorney, Justin Ige, it stated the reason why the decision was made, “Piracy is bad enough, but it is perhaps worse when creative people appear to completely disrespect the intellectual property rights of fellow creatives. Such conduct should not be without due consequences”. A lay man may not understand what we are fighting for as it is more technical than just the lyrics.

Nigeria is a place where writers do not get credits from the artiste they wrote songs for because the artiste wants to get all the glory alone. Producers also do not know that they have a right to royalties even after being paid for the beat.

If I contribute one word to your composition, I automatically have a right to credits as one of the writers. This is a world standard and anything less is unacceptable especially when coming from an artiste that has international exposure.” Since the allegations were initially made, Tiwa Savage has refused to respond to it in any terms.