Corps members who died are buried in Uyo 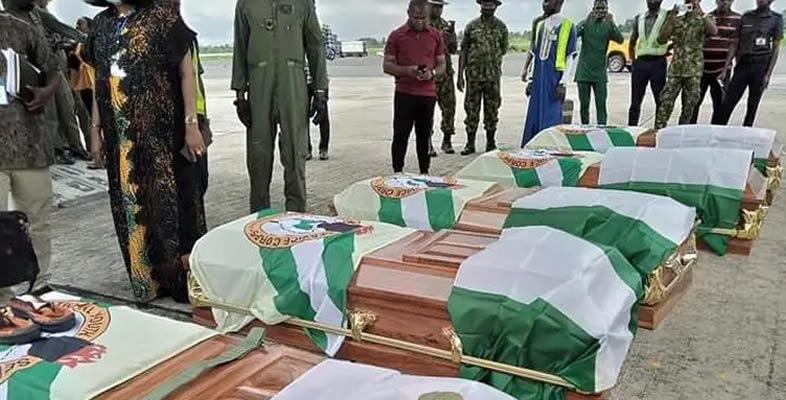 The remains of five prospective youth corps members who died in a motor accident last Wednesday have been buried in Uyo, capital of Akwa Ibom State.

The five corps members, who were graduates of the University of Uyo, lost their lives on July 28 in a motor accident on the Abaji-Kwali Expressway while traveling to the NYSC orientation camp in Katsina.

Their bodies were conveyed for interment in a C-130 Nigerian Air Force jet marked NAF917.

There was a free flow of tears from the deceased family members when their bodies landed at the Victor Attah International Airport, Uyo, in the military plane.

He said that the government and people of Akwa Ibom received the news of the deaths with a heavy heart and prayed God to give the families of the deceased the fortitude to bear the irreparable loss.

“We received the news of the deaths of our corps members with shock and sadness. We pray God to grant the families the fortitude to bear the loss,” Emmanuel said.

Director-General of the NYSC, Brig.-Gen. Shuaibu Ibrahim, while mourning the deceased said, “I had to rush down to the hospital to really confirm if it was true, and at last, it was true.

“We are completely devastated and diminished because as parents we know what it takes to train a child to this level.

“There is nothing anyone can do than to pray God Almighty to give you the fortitude to bear this irreparable loss,” Ibrahim told parents and relatives of the deceased at the 2 Brigade Headquarters, Nigeria Army, Uyo”.

The director-general described the late corps members as patriotic Nigerians who were on their way to Kastina state to do their best for the country.

Next
PSG in hopes to reclaim Ligue 1 title