Members of the Nigeria Labour Congress (NLC), during a nationwide protest over non-payment of the new minimum wage at the National Assembly Complex Abuja…yesterday. 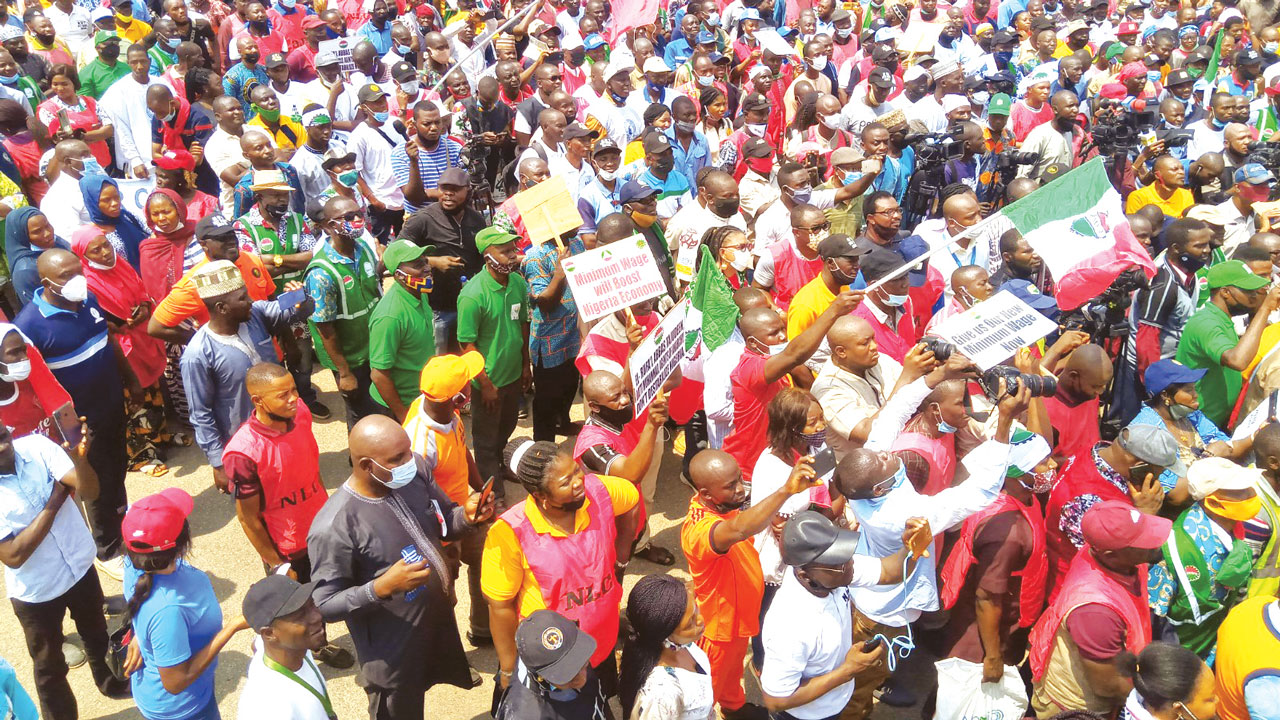 Workers, under the aegis of Nigeria Labour Congress (NLC) and Trade Union Congress (TUC), yesterday, came hard on federal lawmakers and threatened to shut down the economy if the House of Representatives passes a bill intended to move the minimum wage legislation from Exclusive List to Concurrent List.

Datti (APC: Kaduna) argued that the Bill, referred to the House ad hoc Committee on the Review of the Constitution for consideration, was part of the measure required to ensure true federalism and devolution of powers in the country.

The lawmaker had argued that it was improper for the Federal Government to impose the N30,000 minimum wage on states whose means of income and resources differ.

He said if the bill sails through, the recurring labour conflicts between the government and labour unions would be nipped in the bud as labour unions can negotiate wages for their members in their respective states.

According to him, under the Independence and 1963 Constitutions prescription of minimum wage was a concurrent matter to be legislated upon by both the National Assembly.

He referred to the United States, where, according to him, the minimum wage is a concurrent subject-matter. He recalled that in 2018, the minimum wage in 29 U.S. states was higher than the federal minimum wage.
BUT workers protesting in various states of the nation dismissed the argument and also quoted the Constitution to support their positions.

The National President of the Nigeria Labour Congress, Mr. Ayuba Wabba, who led hundreds of members to the House of Representatives, vowed that the organised labour would resist the passage of the proposed legislation.

Saying the decision to vest in the Federal Government the power to fix minimum wage was in tandem with international best practices, he blamed bad governance for the problem associated with the non-implementation of the N30,000 minimum wage.

“Governors collect humongous security votes that have not been used to address the issues of insecurity in the country. If we reduce all of these, I am sure we would have more than enough to pay minimum wage. Minimum is minimum. It is a national benchmark.

“This is our first port of call and therefore they represent every Nigerian. Every constituency is represented. It is my honour and privilege to hand over our letter of protest on behalf of Nigerian workers to the Senate President and Speaker of the House.”

SPEAKER of the House of Representatives in his response, however, said the powers to fix minimum wages of workers in the country would surely be vested with the 36 states governments of the country during the review of the 1999 constitution.

He told Wabba that a final decision on a Bill on the issue had not been made yet.

Represented by the House Leader, Mr. Ado Doguwa, he assured workers that the House would definitely not wish away the position of the organised labour on the proposed legislation.

He said: “There would be an opportunity for you to come and address us through public hearings. That initiative is only an opinion. The recommendation of that Bill is only a proposal. From what I am seeing now, it is clear that organised labour are against that Bill. I want to assure you that the House of reps would give a listening ear to your message.

“We will still invite you to come and engage with relevant committees of which I am a member. You will come and make your position fully. Your position will be heard at the committee level and when we come to plenary to consider the bill, members that are representing your respective communities, engage with them to do justice to that Bill.”

WORKERS in the Southwestern states of Lagos, Ondo, Ekiti, and Oyo also kicked against the plan to move minimum wage to the concurrent list. In Lagos, Labour threatened to shut down the economy if the National Assembly passes the bill.

Presenting a letter to the Speaker, Lagos State House of Assembly, Mudashiru Obasa, during the protest yesterday, leaders of the Lagos State Council of the Congress (NLC), Funmi Sessi, and the Trade Union Congress (TUC), Gbenga Ekundayo, said if NASS passed the bill into law, it would affect the nation in her efforts to reduce poverty and inequality.

The workers said transferring the national minimum wage from the exclusive legislative list to the concurrent legislative list was a license for state governors to drag the country back to the era of ridiculous slave wages, which in the past had precipitated multifarious industrial crises in different parts of the country.

The labour leaders urged Obasa, who was represented by a member of the House and Chairman, House Committee on Accounts, Solaja Saka Nurudeen to take account of the gravity of the scheme and intervene to guide the members of the State House of Assembly aright when the bill comes before him.

Responding, Nurudeen, who said the state’s House of Assembly was on recess, assured the labour unions justice will be done.

IN Oyo, NLC and TUC described the Bill as attempt to turn workers to slaves

Addressing journalists during the protest, the TUC chairman, Emmanuel Ogundiran, called on the Oyo State House of Assembly not to be part of the Bill and not to consider it’s passage, describing it as anti workers bill.

Martins said that the union would do the needful to ensure that the bill does not see the light of the day.

WHILE workers in Ondo State got the pledge of the House of the Assembly to ensure the minimum wage remained on the exclusive list; workers in Ekiti got a promise from the House that their demands would be forwarded to appropriate authorities for redress.

Earlier Ondo workers had presented a protest letter to the Assembly and urged the state lawmakers to reject the bill if transmitted to Ondo State for amendment.

Receiving the letter, the Speaker assured workers and leaders of the organised labour that it would reject the bill seeking the removal of minimum wage from the exclusive list.

He said the bill if passed, will further impoverish Nigerian workers and stressed that all Ondo State lawmakers would ensure that minimum wage would remain in the exclusive list.

SIMILARlY, in South-South and South East states, workers were vehement in their rejection of the bill.

Enugu workers threatened to end the political career of any federal lawmaker who would support the bill.

He appealed to the state lawmakers to add their voice to the call to stop federal lawmakers.

Members of the Imo State chapter of NLC, led by Austin Chilapku of the TUC, in their various banners, rejected the bill, just as their counterparts in Abia marched to state Assembly.

In Akwa Ibom State, The Akwa Ibom NLC State Chairman, Comrade Sunny James, in company of leaders of Trade Union Congress (TUC) and other affiliate unions, staged a road walk from Idongesit Nkanga Secretariat to the House of Assembly complex to present a petition to the Speaker, Mr. Aniekan Bassey.

WHILE the NLC, Cross River State chapter, led by the state NLC Chairman, Ben Ukpepi, said the bill was retrogressive, his counterpart in Rivers, Beatrice Itubo, described the bill as obnoxious and expressed regret lawmakers voted to represent the people, would rather sponsor anti-people bills.

IN the North, it was the same rejection song from Katsina, Jos, Lokoja, Kano, down to Bauchi as workers protested and submitted letters against removal of minimum wage bill from the exclusive list.