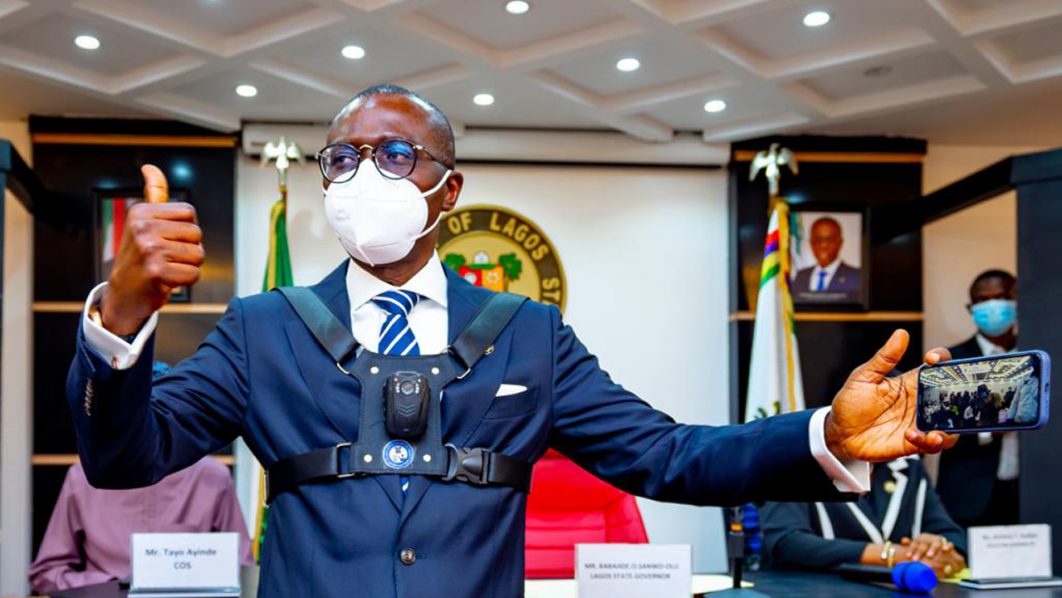 Lagos State Governor, Mr Babajide Sanwo-Olu demonstrating the use of the body-worn cameras for the officers of state’s Law Enforcement outfits during the launch at the Banquet Hall, Lagos House, Alausa, Ikeja, on Wednesday, March 31, 2021. Photo: TWITTER/JIDESANWOOLU.

As part of efforts to monitor traffic officials’ activities on roads, the Lagos State governor, Babajide Sanwo-Olu, has equipped personnel of the Lagos State Traffic Management Agency (LASTMA), Vehicle Inspection Officers (VIO), Kick Against Indiscipline (KAI), among others, in the state with body cameras while on duties.

He said that the measure was considered to promote operational efficiency, reduce personnel excesses and overzealous activities of officers while discharging their duties, and also enhance security and safety in the state. While announcing the newly introduced measure on Wednesday at the Banquet Hall, Lagos House, Alausa, Ikeja, Sanwo-Olu also approved mass training for the state’s law enforcement personnel on the use of body-worn cameras, ahead of the deployment of the digital tools for security operations.

He added that the three-day training for the use of tools, which would commence in May, would be facilitated by the state’s Law Enforcement Training Institute (LETI), headed by Oyekan Falade, and afterward, all state-funded law enforcement officers would be commissioned to wear body cameras for their operations.

Lagos State Governor, Mr Babajide Sanwo-Olu demonstrating the use of the body-worn cameras for the officers of state’s Law Enforcement outfits during the launch at the Banquet Hall, Lagos House, Alausa, Ikeja, on Wednesday, March 31, 2021.

The cameras, the governor revealed, would help the state government check abuse of power and excesses by security personnel, with a view to improving the safety and accountability of officers who will use the devices for evidence sharing and intelligence gathering.

“The security challenges in different parts of the country are worrisome, but with proactive action, the use of modern technological tools, and a mix of well-trained and intelligent officers, we will successfully combat many of these challenges. With body-worn cameras, our law enforcement officers are better equipped to protect lives and properties, thereby, making Lagos safer for us all.”

Sanwo-Olu said the launch of the body-worn cameras would take the government a step closer towards fulfilling its security agenda, stressing that the introduction of devices to frontline security teams and officers would enhance their productivity and professionalism, while also fast-tracking the law enforcement process.