Scotland suffered more Hampden agony as a 4-0 defeat by Belgium made it four losses from six European Qualifiers.

Kevin De Bruyne set up first-half goals for Romelu Lukaku, Thomas Vermaelen and Toby Alderweireld as Scotland were punished for poor defending. Steve Clarke’s side were more competitive after the break but De Bruyne rounded off the scoring in the 82nd minute to make it 11 Belgian goals without reply against Scotland in 12 months. The defeat leaves Scotland in fifth place in Group I, nine points off second-placed Russia with four games remaining, the next one a trip to Moscow. Scotland suffered an identical defeat in a Hampden friendly under Alex McLeish in September last year and Clarke is finding it no easier to get the team functioning, suffering a third defeat in his first four games after conceding basic first-half goals.

Clarke made four changes after Friday’s home defeat by Russia. Kenny McLean, Ryan Christie and Robert Snodgrass came into the midfield and Matt Phillips started up front, with John McGinn, James Forrest, Ryan Fraser and Oli McBurnie dropping out. Just as they had done three days earlier, Scotland started positively but any outbreak of mild optimism in the home support was quickly snuffed out in the ninth minute after Robert Snodgrass sent a free-kick into the box.

Every Scotland player was beyond the centre circle in the Belgian half and the visitors broke clinically after winning the header. Dries Mertens beat Stephen O’Donnell to the ball and spotted De Bruyne’s sprint down the left wing. Andy Robertson found himself isolated against the Manchester City playmaker and Lukaku, and the through-ball and finish were perfect.

Romelu Lukaku
Goal 49 for his country
26 goals in last 22 internationals
Scored in last 5 competitive internationals
4 goals v Scotland, more than against any other nation 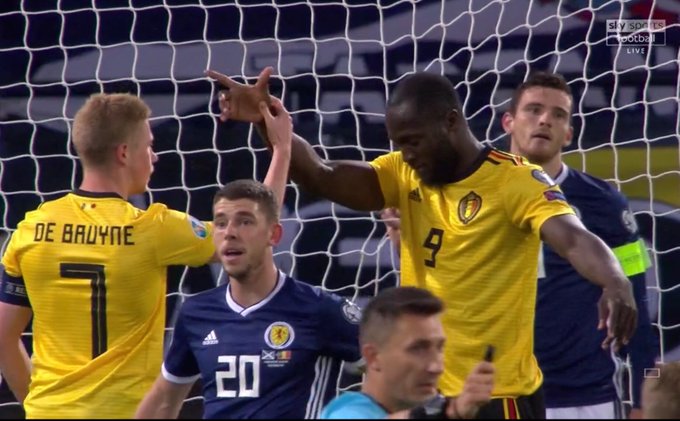 Snodgrass delivered some threatening crosses but Belgium defended them, while Scotland were found wanting at aerial balls into their box. The second goal came after De Bruyne took a short corner in the 24th minute. Robertson was slow at providing help for the outnumbered Callum McGregor and De Bruyne sent in a cross that Vermaelen knocked home from six yards after escaping the attentions of Kenny McLean. The third goal, eight minutes later, was even more straightforward. Alderweireld beat Charlie Mulgrew to De Bruyne’s corner and headed in off the bar from 12 yards.

Toby Alderweireld ends a run of 101 apps without a goal for club & country, since in Tottenham’s 7-1 PL win at Hull in May 2017 – also past David Marshall 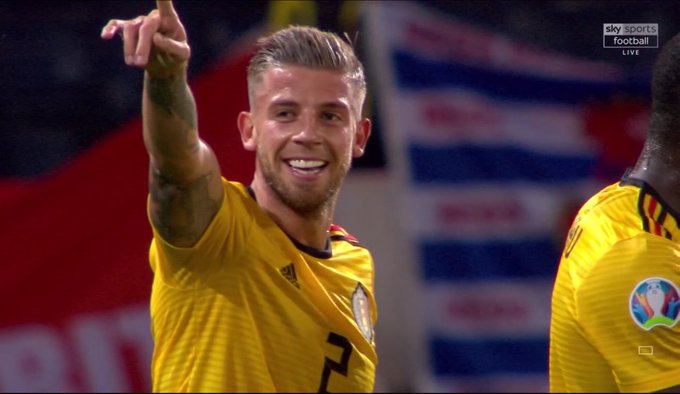 Matty Phillips got a 25-yard strike on target from Ryan Christie’s lay-off but Thibaut Courtois got down relatively comfortably. Belgium could have scored more in the first half. Youri Tielemans volleyed a yard wide from 22 yards after Liam Cooper’s poor defensive header and De Bruyne set up further chances for Thomas Meunier and two more for Lukaku, the best of which the Inter Milan striker volleyed wide from 10 yards. Scott McTominay had a shot saved within 30 seconds of the restart as Scotland came out determined to restore some pride, but David Marshall soon made a brilliant stop from Mertens after the Napoli wide man was given freedom to run into the box.

Robertson had a shot saved from a tight angle after Christie’s incisive pass and the home fans were on their feet after O’Donnell went down in the box, but the right-back was correctly booked for diving. Scotland huffed and puffed but De Bruyne got the goal his play deserved, after missing a good earlier chance, when he swept the ball into the corner from Lukaku’s pass. Scotland will miss the suspended McTominay in Moscow after he picked up his third booking of the campaign, but even victory there would realistically leave them needing too much to seal a top-two spot. They will surely look ahead instead to a home play-off next March following their Nations League success.

The star of the show

Scotland will be sick of the sight of De Bruyne. The Man City star has had a direct hand in seven goals in just four games versus Scotland (two goals, five assists), including scoring once and assisting three goals at Hampden Park. 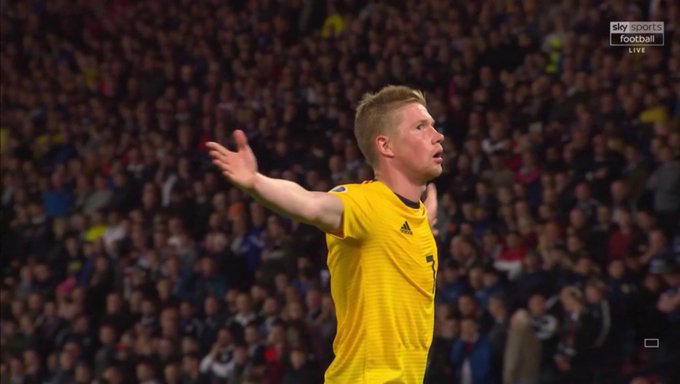