Luke Shaw own goal hands Barca advantage. Luke Shaw’s first-half own goal handed Barcelona the advantage as Manchester United suffered a frustrating 1-0 defeat in their Champions League quarter-final first leg at Old Trafford. The United left-back gave Barca a deserved lead on 12 minutes when he deflected Luis Suarez’s header into his own net, with the goal confirmed following a VAR review. United responded well to the early setback, halting Barca’s dominance on the ball, but their cause was undermined by a toothless attacking display which failed to yield a single shot on target in the Champions League for the first time since 2005.

Having overcome a two-goal deficit to knock out Paris Saint-Germain in the last-16, United need to produce another heroic comeback to progress to the semi-finals when they travel to the Nou Camp on April 16. Marcus Rashford’s fiercely-struck free-kick flashed wide inside four minutes but Barca were dominant in possession and it was not long before their precise passing unlocked the United defence. Lionel Messi gathered Sergio Busquet’s ball over the top and cleverly crossed to the back post for Suarez, whose header deflected in off Shaw. The goal was initially ruled out for offside but the relief inside Old Trafford was short-lived as a brief consultation with VAR found no infringement and the goal was allowed to stand.

United prevented Barca from building momentum after their opener, pressing their opponents high, and the hosts had claims for a penalty rightly rejected when Scott McTominay went to ground under a challenge from Gerard Pique on the half hour. Another incisive Barcelona move nearly yielded a second goal on 36 minutes, but David de Gea produced a fine save with his feet to deny Philippe Coutinho after he was released in behind by Suarez. United should have drawn level four minutes before half-time when Rashford’s cross from the right found Diogo Dalot unmarked at the back post, but the Portuguese got caught in two minds and sent an aimless header across the face of the exposed Barca goal. 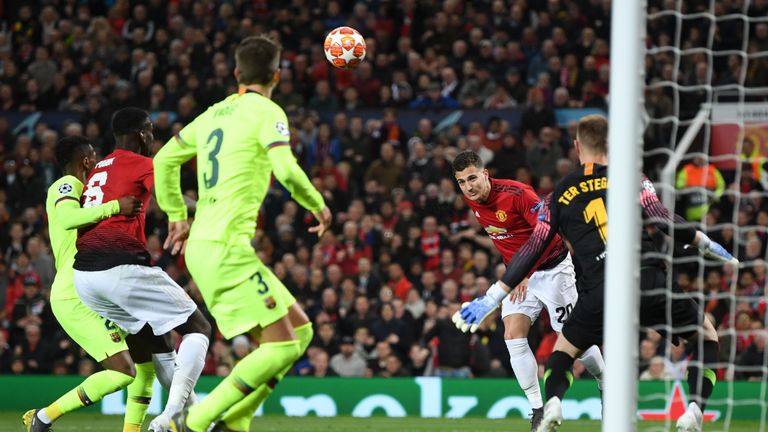 United lacked the clinical edge in front of goal and Rashford sliced horribly wide after goalkeeper Marc-Andre ter Stegen’s punched clearance landed at the striker’s feet within six minutes of the restart. After Suarez rifled a shot into the side-netting, Ernesto Valverde introduced Arturo Vidal and Sergi Roberto, and the latter nearly had an immediate impact as his mazy run into the area was halted just as he prepared to pull the trigger by a vital challenge from Shaw.

Barca upped the tempo in search of a potentially crucial second, but United prevented further damage, living to fight another day ahead of next Tuesday’s return leg in Catalonia.

Ole Gunnar Solskjaer: “Going to the Nou Camp is going to be a challenge. It would be a greater achievement [than the comeback against PSG]. With the history of Barcelona, they are not used to losing at home, but we can do it, no doubt about it. We know we can carry a goal threat. Whoever is playing up front, we have to provide a bit more ammunition for them.”

Ernesto Valverde: “It was a great header from Luis [Suarez]. He was fighting for every cause. He was getting stuck into the defenders, trying to work really hard. We suffered, they caused us problems in the second half, but we are happy overall with the result.”