Neymar has been ruled out of Brazil’s 2019 Copa America campaign after rupturing ankle ligaments in a friendly against Qatar on Wednesday.

Neymar was evaluated and subjected to complementary imaging tests that confirmed ligament rupture in the ankle,” a statement from Brazil’s football federation read. The 27-year-old suffered the setback in the 20th minute of the 2-0 friendly win in Brazil. “After suffering a sprain in his right ankle during last Wednesday’s game against Qatar. 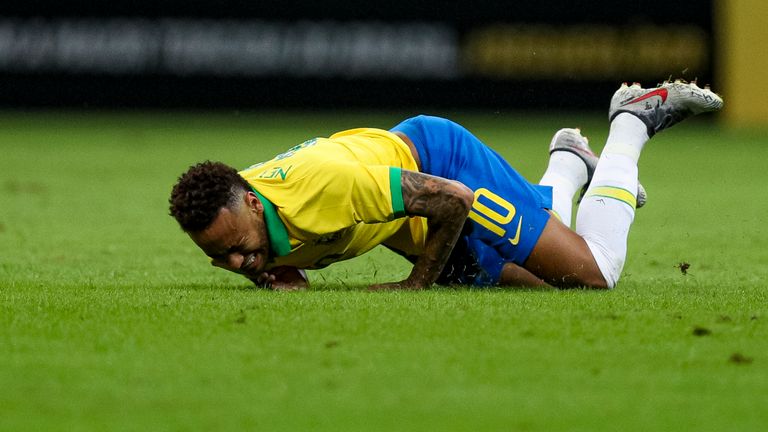 Neymar left the stadium in tears after damaging his ankle during a hard tackle inside the fist five minutes of the game.

“Due to the seriousness of the injury, Neymar will not have the physical conditions and sufficient recovery time to participate in the Copa America Brasil 2019.” Hosts Brazil kick off the tournament on June 14 against Bolivia, with the final set to be played on July 7 at the Maracana in Rio. Neymar has picked up several injuries dating back to 2014, when he missed the World Cup semi-final against Germany with a back injury. The former Barcelona forward also injured his metatarsal in the months leading up to the 2018 World Cup and missed the final months of the most recent Ligue 1 season with a similar problem. The friendly against Qatar was the first major public appearance for Neymar since a woman accused him of rape at a Paris hotel on May 15.

The five-times world champions were rarely troubled by a limited Qatar side, who missed a VAR-assisted penalty in injury time. “We won and the feeling is that we won well,” said Philippe Coutinho after his man-of-the-match performance. “We pressured them and we did what we wanted to do.”