Governor Babajide Sanwo-Olu of Lagos State has assured officials of world football –governing body, FIFA that the Centre of Excellence has the will and the capacity to ensure it meets the requirements for hosting the 10th FIFA U20 Women’s World Cup finals next year. 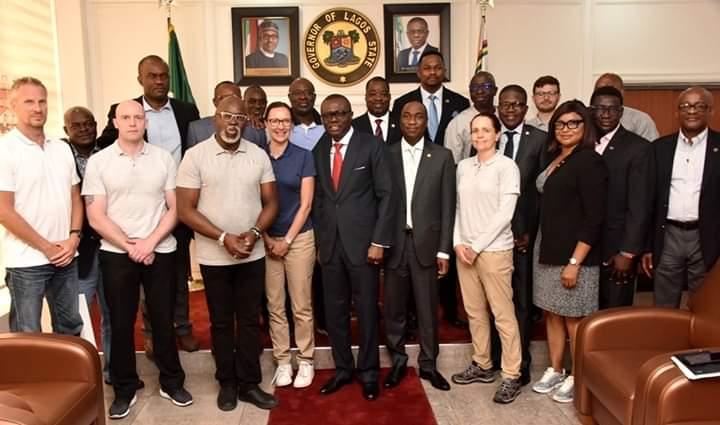 Describing the estimated 22 million people of Lagos as resourceful, dynamic and full of positive energy, Sanwo-Olu noted that the strength of the state lay in its diversity and a youth population driven by the will to succeed. “We want to use sport as an engaging tool, as a corrective narrative to show that the positive energy of the youth can indeed take a society to a high level. I want to assure that we are ready to meet your high standards in the areas of accommodation, security, logistics and crowd management, and also savour that unique experience of hosting a FIFA tournament. “I want you to see Lagos State as a partner that understands that your next tournament must be better than the last. We will make sure to upgrade facilities wherever this is required,” Sanwo-Olu said as an inspection team from FIFA and including officials of the Nigeria Football Federation, Amaju Melvin Pinnick, paid him a courtesy call in his office on Tuesday. Describing Pinnick, who is a Member of the CAF Executive Committee and Member of Organizing Committee for FIFA Competitions, as “a resourceful, award-winning, never-say-die, self-driven and strong believer in the Nigerian Project,” Sanwo-Olu said Lagos State was excited to be included in the plan to host the first-ever FIFA women’s tournament in Africa, and would do everything to make Nigeria and Africa proud.

Earlier, Pinnick had introduced the FIFA team, led by Rhiannon Martin (Head of FIFA Women’s Football Organizing) and including Christopher Exley, Heyral Jurgen, Sara Jane Booth and Kliment Taseski, saying that the world body has tremendous confidence in Nigeria to meet its requirements to host the championship. “Our country is one of only four countries in the world to have played at every edition of the FIFA U20 Women’s World Cup since it began in 2002. We have played in two Final matches and reached the semi final once. I believe it is time to take it to the next level. It is time we win the competition and it would be even more fulfilling to win it on home ground.” The FIFA team and accompanying Nigerian officials had earlier inspected facilities and equipment at the Onikan Stadium, St. Nicholas Hospital, Campos Square, Eagle Club, Teslim Balogun Stadium and the National Stadium Leagcy Pitch before arriving at the Governor’s office.

After the visit, a number of the Nigerian officials led by President Pinnick as well as three members of the FIFA team flew to Benin City to inspect the facilities there, before flying to Asaba to spend the night ahead of inspection of facilities in the Delta State capital on Wednesday, from where they will fly to Uyo. Meanwhile, the remaining two FIFA officials and some NFF and Lagos FA officials led by the 1st Vice President, Barr. Seyi Akinwunmi, inspected the Agege Stadium, Lagos State University Teaching Hospital, University of Lagos Sports Centre and the Yaba College of Technology Sports Centre. The tour will be rounded off on Thursday when the travelling party flies from Uyo to Abuja, to meet with Vice President Yemi Osinbajo, before flying to Lagos for a wrap of the visit and departure to Zurich of the remaining three FIFA officials.